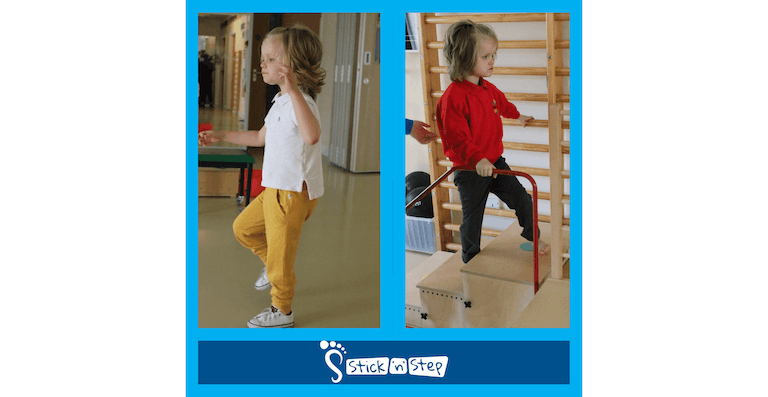 Six year old Leo has attended Stick ‘n’ Step since he was 3 and when Mum Emma first brought him for his initial consultation she says she always hoped to see Leo walk, but she didn’t know whether it would ever happen.

Emma first heard about the charity from an ex-neighbour whose daughter had attended the centre in  Wallasey for several years, so she undertook some research to find out how conductive education (CE) worked and started following Stick ‘n’ Step on social media. She brought Leo to Stick ‘n’ Step when he was two and a half to talk to the CE team and get an idea of how they might be able to help. A place became available about six months later.  At this point Emma had not been given a specific diagnosis, other than being told that Leo had Global Developmental Delay which encompassed a range of things that he had wrong with him.

Emma said “I was told Leo had low muscle tone, epilepsy, and a learning disability. He wasn’t gaining weight, had an enlarged head due to macrocephaly and also had nystagmus, resulting in involuntary eye movements which can make it difficult for Leo to focus on anything more than 6 metres away.”

Leo was part of the national 100,000 genome project which took place between 2013 and 2018 to look at genome sequencing of rare diseases. Emma didn’t receive the official diagnosis of Leo’s condition until a month before he was four years old when she was told that Leo had a rare genetic disorder referred to as KPTN.

Leo settled in well at Stick ‘n’ Step and although Emma’s dream was to see him walk, she described his progress in the first couple of years as being ‘almost at a snail’s pace’.  At five years old Leo hadn’t taken a single step although he had learned to stand using a walking frame. A few months after that he started to take a few steps holding the parallel bars, but nothing could have prepared Emma for the feeling of total joy when she came back to the centre to learn that Leo had taken his first independent steps.

She said “There really are no words to describe how I felt at that moment. Because of Covid, parents couldn’t use the Family Room which is where I normally sat with a coffee and watched Leo’s session on the TV screen, so I’d gone for a run. When I got back to the centre the classroom team told me – and even better than that - they had captured it all on video for me. I just collapsed against the wall and cried tears of joy. It really was better than winning the Lottery”.

Other areas of development that the classroom team at Stick ‘n’ Step are working on with Leo are developing skills to help him learn how to feed himself. Currently Emma still has to spoon feed him and she has praised the staff for their ‘ingenious’ methods which include holding a mirror up in front of Leo and then standing behind him and operating his arms to demonstrate the movements he needs to copy.

“No other therapist or physio has even given me the sort of practical advice, hints and tips that the classroom team at Stick ‘n’ Step have. Although his self-feeding goal, and goal of taking the first steps towards toilet training, have been delayed a bit due to Covid, and the subsequent restrictions imposed on the classroom team, I know that as soon as they are able to, they will start working on these areas again with Leo. During the pandemic and the various period of lockdown, Stick ‘n’ Step continued to provide us with regular support. They dropped off equipment for us to use and were there to help in any way they could which was amazing, especially when we learned that Leo’s physio sessions had been put on hold at the Royal School for the Blind in Liverpool where hen ow attends full time.”

When asked what Leo enjoys most about coming to Stick ‘n’ Step Emma said without any hesitation that it is the music which motivates him. Although non-verbal, Leo loves the singing and the rhythmic music that accompanies many of the tasks and activities the children do in their weekly sessions. He is fascinated by all types of music and at home can be regularly seen tapping to music. “He does also like the chocolate buttons at the end of the session” Mum added!

As well as praising the staff at Stick ‘n’ Step, Emma also commented on the wonderful range of equipment that is available for the children to use. She said “One of the goals Leo is currently working towards is learning how to negotiate obstacles when he is walking – this is difficult for children with learning disabilities, but I have no doubt that the classroom team will ensure he achieves this as well as his other goal of learning to independently get on to his feet from a sitting position.”

Emma feels especially grateful to her ex-neighbour for telling her about Stick ‘n’ Step. She says the charity has made the world of difference to Leo and to their whole family.

“Leo’s confidence has grown, and I totally credit Stick ‘n’ Step staff with getting him walking. The repetitive routines and the way sessions are structured are really helping Leo to learn new skills which I hope can give him some independence in the future. We can’t thank you enough.”